Season 2 Episode 9 – Pat is reminded of painful memories from his past; Mike is forced to confront the guilt he feels for his role in Icicle’s death; Courtney struggles to hold on to hope after Eclipso targets those around her.

1. The opening scene to this episode was pretty Intense as we see a glimpse of Eclipso’s past and a man named Bruce Gordon who let Eclipso take over his body. Eclipso is trying to convince Bruce to kill a man so Bruce can have his wife. After Bruce debates suicide he puts the gun down and allows Eclipso to take control.

2. Pat thinks back to the day of the funeral for Dr. Midnights’ daughter. The scene included members of the JSA and this time we had an appearance from The Flash. The funeral was a hard watch as we hear Rebecca’s mother breaking down to Dr. Midnight over the loss of their daughter, and what Eclipso did to her.

3. These Flashbacks have been needed for a while, the original members of the JSA have always been spoken about but given how relevant they are we really haven’t seen much of them from back in their time. It’s nice to see the relationship Pat and Starman had.

4. As Eclipso messes with the minds of Barbara and Mike, we see Mike confronted by Cameron, for the death of his Dad. We then see Barbara sitting in her car as the doors lock and Icicle sitting in her back seat as the car freezes over. The scene was incredibly intense as at first, you weren’t sure if it was really happening or if it was Eclipso, so at first glance, all we see is Cameron going to kill Mike and Icicle going to kill Barbara. Shade has a brief return as a shadow to help Barbara see reality again and that none of it is really happening. A truly great scene and all the actors played their part incredibly.

5. Eclipso really is going in hard on Courtney’s family, next, we see Pat confronted by his past which showed him wiping blood off his hands and Bruce Gordon standing in the background. From this, we can assume the JSA made the decision to kill Bruce once Eclipso had taken over his body.

6. Pat is finally ready to tell Courtney the truth about how the JSA stopped Eclipso the first time around. It doesn’t show what the JSA did to Bruce Gordon, only what has left behind afterward, the Black Diamond. Apparently, this tore the JSA apart for quite a few years, which was why the team wasn’t able to defeat the ISA all those years later.

Pat has got to stop keeping things from Courtney and accept that she has taken the mantle and is Stargirl. We are back to the same position again where he has shown he clearly doesn’t trust her and it has got to change.

He has been fairly disappointing this season. I understand he’s trying to protect his step-daughter but him not telling her about the JSA caused the team to collapse and go through tremendous amounts of pain. Understandably the only way to kill Eclipso is to kill the host. If he told Courtney and the team that weeks ago, they could have found a different way. That was something Pat and The Flash initially wanted as well. Pat needs to be better and more involved. The “dad” act can leave now. Courtney has proved time and time again that she’s capable and worthy. We need to see that more.

My favourite moment would be John Wesley Shipp returning to the role in this series. This wasn’t something I honestly wasn’t expecting given how last season went, but it was great to see him again and I really hope this isn’t the last we see of him on this show in particular.

Although he does have a dislike, Pat really stood out in this episode. We saw his relationship with Starman, and also we see that Pat had a pretty rough time as some of the JSA did not see him as a team member and just ad the mechanic. We saw a decision that was made from Pat’s past that ultimately meant a man lost his life.

An amazing episode this week, it’s a shame it ended with Pat yet again keeping something from Courtney. But other than this I loved seeing the flashbacks of the JSA, and the effects Eclipso had on the entire family was brutal.

An amazing episode this week, it’s a shame it ended with Pat yet again keeping something from Courtney. But other than this I loved seeing the flashbacks of the JSA, and the effects Eclipso had on the entire family was brutal. 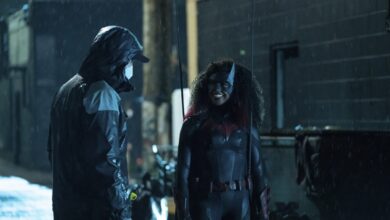