Season 3 Episode 7 – Vic consults an old friend for help with a major life change, Cliff takes his online habits too far and Jane battles the “others” for Kay. Sensing imminent danger, Madame Rouge attempts to rally the highly distracted group.

2. After Larry finally gets rid of the parasite inside of him by vomiting it up, we see that the Sisterhood is sending each member of the team a message with their symbol as a warning that they are coming.

3. Vic meets a doctor from his childhood who worked with his mother at S.T.A.R. Labs. We get an unexpectedly realistic reason as to why she had left with her explaining that the company had increased their mass production of weapons after 9/11 and she wanted to heal people and not harm them. Doom Patrol has always been a deep show, but I will admit that I was caught off guard by this character’s statement.

4. Jane finds out that Cliff sold all of her music records to pay for the sketchy pop up ads and websites on the internet. While still unsettling, Cliff’s addiction to the internet this season has been a joy to watch. The fact that he proudly explains that he lost “15,000 acorns to Mr. Fox while trying to beat him at a double-or-nothing nut jump in order to get a Chipmunk Master keychain” was insane yet still hilarious.

5. Before Jane can threaten Cliff for selling her records, she suddenly coughs up a t-shirt with the Sisterhood of Dada’s logo which ends up on Cliff. When Madame Rouge comes in to warn them about it, Jane finds out that Cliff also sold Flit’s Cher workout tapes. This causes Flit to take over and teleport Cliff to his daughter’s house in retaliation.

6. In the past, we see that years have gone by since Rita met the Sisterhood at the Bureau of Normalcy. One person who has changed greatly since the last time is Madame Rouge, who has become much more cynical and is showing her loyalty more towards the Bureau as opposed to the Sisterhood.

7. We meet a man named Wally Sage who has the ability to bring drawings to life. Not only does he have extraordinary abilities but he also later becomes the person who creates Flex Mentallo. When Madame Rouge sees his power, she classifies him as a weapon, much to his dismay.

8. The Bureau of Normalcy itself has basically become an allegory for Nazism, with its security literally dressing up and marching like stormtroopers.

9. Rita and Malcolm’s relationship is very sweet and endearing. While the other members of the Sisterhood are shown to have become disillusioned with the world around them, both Rita and Malcolm have held on to their optimism and have not changed as much as the others.

10. Despite being advised by Madame Rouge to burn the parasite, Larry decides to take care of it and make sure that its comfortable. While this odd decision on Larry’s part is to show that he has a good heart, part of it seems to show that he’s trying to fill a void after he and his son had officially burned bridges.

11. The other personalities have stolen Kay’s new bike as a way of controlling her, causing the girl to lash out at Jane. When Jane confronts the other personalities and reminds them that their purpose is to protect the girl, they fire back by asking who is protecting them. This shows that despite him no longer being an active threat, the Candlemaker has left the Underground scarred and made the other personalities more fearful of the outside world than they already were.

12. After insisting that he can watch his baby grandson while his daughter goes out on a date night with her wife, Cliff finds that he can barely take care of him due to his robot body and addiction to the internet. This gets even worse when Cliff nearly uses her daughter’s credit card for the internet. Despite deciding not to do so, we later see that he may have used the card for his addiction, which may cause a rift with his daughter in the future.

13. During a scene in the past in which the Sisterhood urges Rita and Malcolm to help start the Eternal Flagellation, we subtly discover that Malcolm was the mysterious person who saved Rita and the others in the afterlife.

14. The Sisterhood captures Madame Rouge and the others, bringing them to a room where the Doom Patrol are forced to dance in front of her. While the team finds this to be harmless, Madame Rouge starts to regain her memories.

16. The man from earlier Wally Sage has been forced to be a soldier and accidentally kills Malcolm by electrocuting the metal cage inside of him with a cattle prod. It is such a heartbreaking moment as even though we had only seen his romance with Rita for two episodes, they had clearly grown a connection for the many years they had spent together.

17. The team finds Rita in the present day, who is now a member of the Sisterhood. When they are taken to the front yard of the manor, they find the Sisterhood with a bird cage containing a giant egg. The egg hatches and reveals a bird-like creature with a human face resembling that of Malcolm’s. The thing is straight up nightmare fuel as it attempts to get out of its cage and roars at the Doom Patrol.

18. When Madame Rouge refuses to admit fault and flees from the Sisterhood, Rita opens the cage where the creature multiplies into hundreds of smaller versions of itself.

19. One by one, the disturbing bird-like creatures swarm at the team and teleport each of them to an unknown area once they make physical contact. It is a massive cliffhanger to such a powerful episode.

Vic calls Roni to tell her about his decision to get synthetic skin. Despite the two being on very shaky terms, Roni advises him not to go through with it, reasoning that he is better off being Cyborg than he is as Victor Stone. Vic is upset by her statement but considers her point. Even though he decides to go through with it anyway, it was very heartwarming to see Vic not just angrily brush her off, showing that they both still deeply care for each-other despite being more or less enemies.

I have to say that Madame Rouge was the MVP this week. Seeing her gain her memories back while remembering that she betrayed the group that considered her to be part of their family was such a tragic moment. What makes it even more heartbreaking is that she attempts to rationalize her decision and claim that she made useful agents out of them. Michelle Gomez is absolutely killing it this season and while she has not topped Timothy Dalton as the complex pseudo-parental figure of this show, she is coming extremely close.

This was a terrific addition to an already fantastic season. While it was mainly a set up episode for the insanity that is to come down the line, it was fascinating to see the beginning of the Eternal Flagellation as well as the moment in which the Sisterhood lost their innocence. Overall, this episode was a great way to make the audience understand the show’s villains and leave the viewers on the edge of their seats with its shocking ending.

This was a terrific addition to an already fantastic season. While it was mainly a set up episode for the insanity that is to come down the line, it was fascinating to see the beginning of the Eternal Flagellation as well as the moment in which the Sisterhood lost their innocence. Overall, this episode was a great way to make the audience understand the show’s villains and leave the viewers on the edge of their seats with it’s shocking ending.

Legends of Tomorrow "The Need for Speed" Review 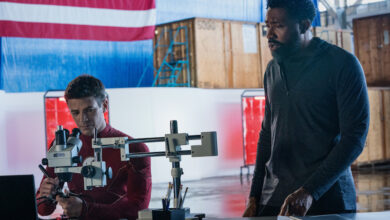 Legends of Tomorrow “A Woman’s Place Is in the War Effort!” Review

This was a terrific addition to an already fantastic season. While it was mainly a set up episode for the insanity that is to come down the line, it was fascinating to see the beginning of the Eternal Flagellation as well as the moment in which the Sisterhood lost their innocence. Overall, this episode was a great way to make the audience understand the show’s villains and leave the viewers on the edge of their seats with it’s shocking ending.